What is VMware Encryption for Data-at-Rest?

VMware vSphere encryption for data-at-rest has two main components, vSphere VM encryption and vSAN encryption. Both only require the vCenter vSphere Server, a third-party Key Management Server (KMS), and ESXi hosts to work. It is standards-based, KMIP compatible, and easy-to-deploy. 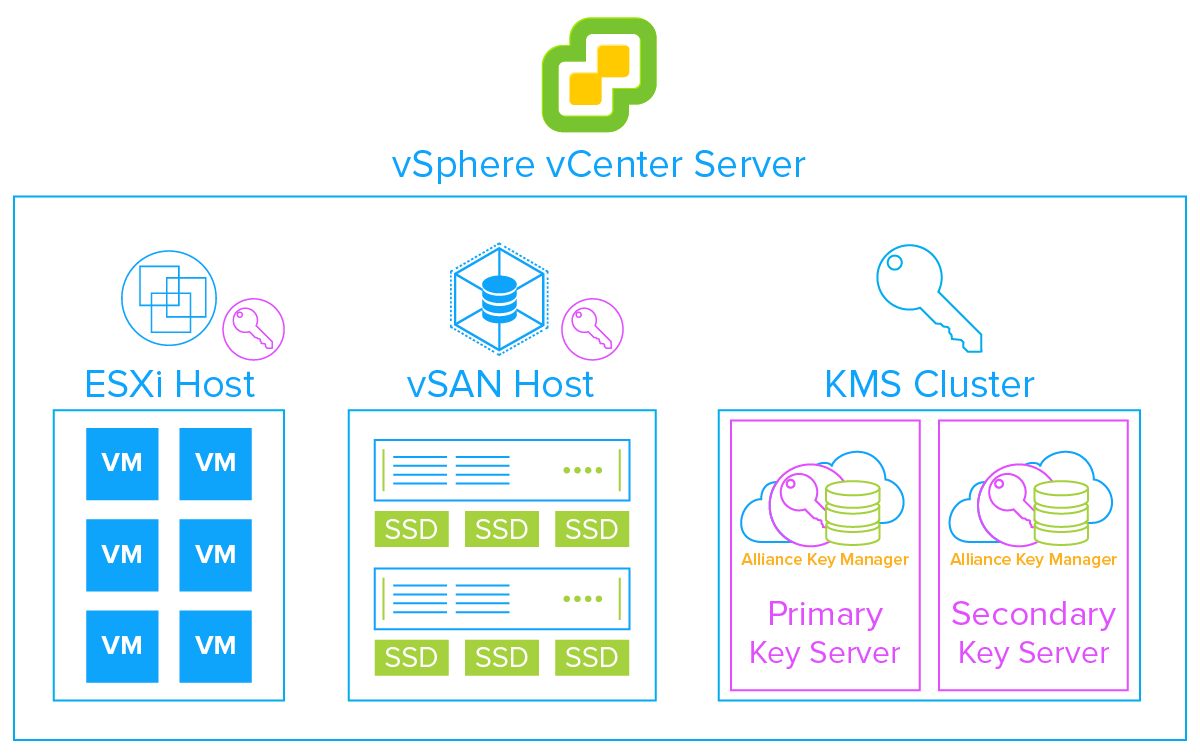 Which Encryption Option Should you Choose, vSphere VM or vSAN?

Data security is paramount for sensitive data-at-rest. Fortunately, protecting your data in VMware is relatively easy with the introduction of vSphere VM encryption in version 6.5 and vSAN encryption in version 6.6. Even better, for most folks, you won’t have to choose between each option, you will likely use both as needed. That said, there are some times when you might prefer one over the other. With that in mind, here are some of the features for each and how they are the same/different.

One of the most clear cut cases on preferring one encryption option or the other is in a multi-tenant situation. VMware gives these examples:

Engineering and Finance may have their own key managers and would require their VM's to be encrypted by their respective KMS. Or maybe your company has been merged with another company, each with their own KMS. Additionally, you may have a "Coke & Pepsi" scenario of two unrelated tenants. VM Encryption can handle this use case using the API or PowerCLI Modules for VM Encryption. 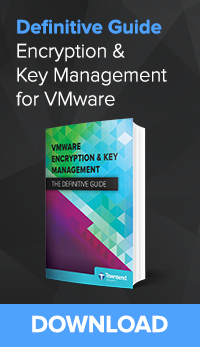 Since each VM is encrypted by a different key, vSphere VM encryption may be better suited for multi-tenant situations. In this way, not only will each tenant be assured that their sensitive data is not commingled with other tenants data (separate VMs), but their data is protected by separate keys.

Beyond that, VMware notes that “vSAN has unique capabilities for some workloads and may perform better in those situations.” So, if you are protecting larger datastores with a single tenant, vSAN would be your best option.

With these distinctions in mind, here is the best news: They are equally easy to set up! We have put together two videos to highlight the steps to get encryption enabled in each environment:

For a more detailed look at vSAN encryption, please visit our post: vSAN Encryption: Locking your vSAN Down. Here is a partial list of steps for enabling vSAN encryption:

vSphere VM and vSAN encryption for data-at-rest is a powerful tool in protecting your sensitive data - for both companies and VMware Cloud Providers. It is standards-based, policy-based, and KMIP compliant. This makes it both powerful and easy to enable. While each has different strengths that make them a better choice in some situations; most of the time, it will just come down to needing to either secure data in a VM or vSAN datastore.

If you have sensitive data in VMware and are not encrypting, enable encryption today! We are happy to help.

What is VMware’s vSphere Encryption?

VMware’s vSphere encryption, first introduced in vSphere 6.5, enables the encryption of virtual machines (VMs) and vSAN. vSphere’s encryption protects your existing VMs, new VMs, vSAN clusters, as well as associated files. It is relatively easy to set up and with the use of a compliant key management server—secure.

(Part one of this series deals with VM encryption. Part two will cover vSAN encryption)

A Unified Way to Encrypt VMs 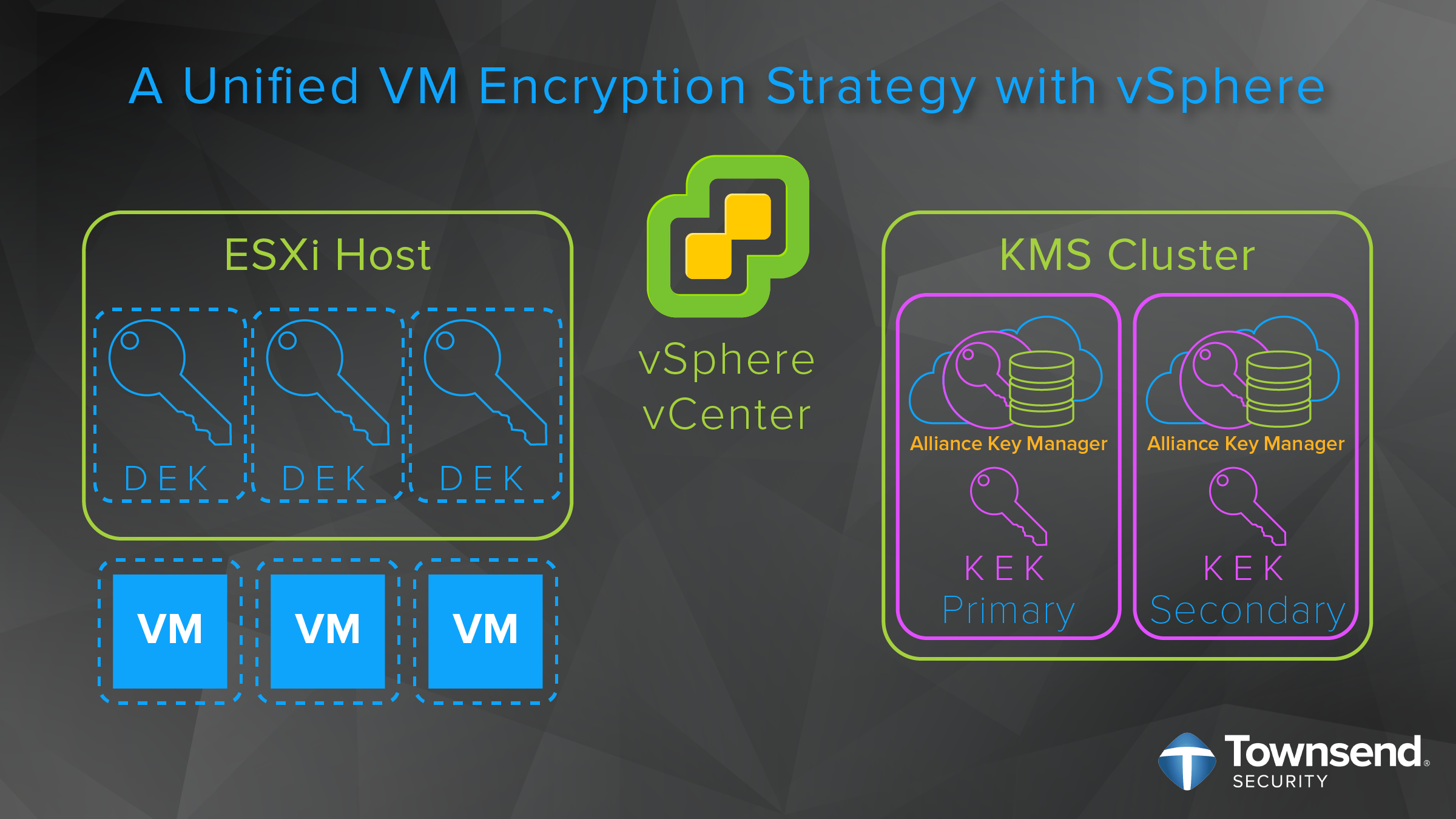 Data is a bedrock asset for today’s enterprise business. Its value is too great to ignore. Data security, then, is mission critical for those looking to maintain brand integrity, intellectual property confidentiality, and customer trust.

VMware vSphere 6.5 gave its users powerful data security tools; among them AES-NI encryption. The reason this is great news: instead of an ad-hoc approach to encrypting sensitive data where individual sources of encryption are found for each type of database or application, you can now encrypt directly in VMware’s hypervisor creating a unified source for encrypting and managing that encryption. And through their KMIP interface, managing your encryption keys is pretty painless. But more on that later.

Expert Weigh-in:
The huge benefit of vSphere Encryption is the fact that data is encrypted when it leaves its source. This results in data traveling encrypted to its destination, allowing for the highest level of security, all while maintaining simplicity in terms of management and configuration.
~Duncan Epping, Chief Technologist HCI, VMware

Expert Weigh-in:
A major advantage of VM Encryption is that it is Guest OS agnostic. Whether the virtual machine is Windows, Linux or any of the other operating systems supported in vSphere, the encryption is the same. There’s no change to the guest OS and no “in guest” monitoring or configuration. Additionally, reporting on which virtual machines are encrypted or not is just one line of PowerCLI!
~Mike Foley, Staff Technical Marketing Architect - vSphere Security

The Advantages of Using VM Encryption

With VMware vSphere 6.5 and up, you are able to encrypt individual VMs. The main difference between VMware encryption and other encryption methods is ease 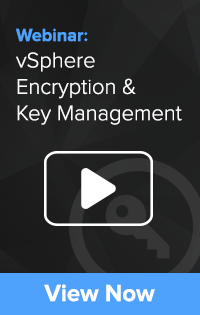 of management. As VMware puts it, because “VMs are treated as objects that can have a policy applied to them, there is no need to manage them individually.”

Here are some of the advantages that this brings:

Expert Weigh-in:
One thing few people think about with encryption is disaster recovery. Because of the reliance on an external KMS, you can place replicating Key Managers in various locations. vCenter will see them as a “KMS Cluster”. Should your primary site go down and you need to recover encrypted VM’s it’s as simple as connecting a new vCenter to the KMS cluster and adding the VMs to the inventory. The impact of IT operations is minimal.
~Mike Foley, Staff Technical Marketing Architect - vSphere Security

Expert Weigh-in:
Policy Based encryption and Managed Encryption keys means the difference between an organization protecting their information and exposing their information. Removing the chance of end-users to not-encrypt information means the Business can have assurances they can take to the bank, which is essential in a world of compliance, GDPR, and not to mention security risks or exposure.
~Christopher Kusek, vExpert and Tech Evangelist

Now that we know some of the advantages of using VM encryption, let’s looks what is (and is not) encrypted. Why? VMware did a great job making sure all sensitive information can be secured. The list below will go to illustrate that.

What Is/Is Not Encrypted

According to VMware, here are the items that can be encrypted (and those that can’t) with vSphere’s VM encryption:

What can be encrypted:

What is not encrypted (and why):

Expert Weigh-in:
I like vSphere encryption because there’s nothing in the guest OS or at the user-level that might go wrong. vSphere encryption encrypts what needs to be encrypted - your company’s data - that’s stored inside the VM disk.
~David Davis, vExpert and vSphere video training author at Pluralsight.com

Now that we know some of the advantages of VM encryption and what can and cannot be encrypted; here is the last reason to use vSphere to create a unified encryption strategy—it is easy to set up. Here is a quick video showing how easy it is.

Here are those steps for those that would like to just read it:

Expert Weigh-in:
vSphere encryption makes securing your data easier than I think most of us thought possible. With vSphere encryption all you do is right-click on a VM and apply the encryption storage policy. Boom! Encryption is done!
~David Davis, vExpert and vSphere video training author at Pluralsight.com

It really is that easy. Not only can govern your encryption at the hypervisor layer, deploy standards based AES encryption on a per VM basis (allowing you to secure only those workloads that require it), but you can do so quickly. It is a great encryption option for any business.

VMware vSphere VM encryption creates a unified strategy for protecting your sensitive data within vSphere by using the hypervisor to perform the encryption. This means that you do not need to first consider what is in the VM (guest OS, specific databases, etc.) in order to encrypt it. According to VMware, this yields the following benefits:

All this and more means that it is easier than ever to secure your company’s sensitive data. Once you have configured your vSphere vCenter Server to enable encryption, simply choose which VMs you want to encrypt and your data is secured. It’s that easy.