Periodically people ask me about hashes and why the use of a salt value with a hash is recommended. Let’s have a look at this topic in our last blog for 2011!

The use of a secure hashing algorithm is common in business applications. It has a variety of uses in the areas of authentication, data integrity, and tokenization. A hash method is sometimes called one-way encryption, but this is a bit of a misnomer.  It is true that you can’t reverse the result of a hash operation to recover the original value (thus it is one-way), but it is not formally an encryption method. This one-way property of hash methods is what makes them so useful. You don’t have to worry about sending a hash value across a network in the clear as it can’t be reversed. (At ease you crypto people, I know about the developing security concerns about SHA algorithms; more on that later).

While there are a number of hash algorithms available in the public domain, most security professionals recommend the use of the SHA-2 family of routines. I find that most people now use the SHA-256 algorithm when they want to create a one-way hash of some data, although the more secure SHA-512 method is being used more frequently. Older methods such as MD5 and proprietary hash methods should not be used in modern applications due to security concerns.  With SHA-256 and SHA-512 we have a really good method for doing one-way hashes.

So why do some security professionals recommend the use of a salt value with hashes, and what is salt?

The term salt refers to a one-off value that is difficult to guess. In practical application, a random number is generally used for a salt value. For the sake of this discussion, we will assume that a salt value is a random number.

By adding a salt value to some data before hashing it, you make it more difficult to guess the original value. Notice that I didn’t say you make it easier to reverse! For all practical purposes, you can’t reverse a hash value. But a clever attacker might guess at the original value and perform a dictionary or brute force attack on a hashed value. How can that be? 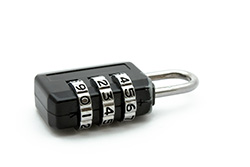 Well, take the example of your banking PIN code. It might be 4 or 5 digits in length. From the point of view of modern computers, that is a really small set of numbers to test against a SHA-256 algorithm. Only 9,999 values for a 4-digit banking PIN code. That is going to take less that a second to run through all of the possibilities. So this is where a salt value can come in handy. If you are creating a hash value of very small bit of data, you can append a salt value to the original data and make it really hard to attack that hash value. And that’s why using salt with your hashes is often a recommended security practice.

As I hinted at above, there have been some developments in attacks against the SHA-2 family of hash algorithms. I don’t think these attacks rise to the level of a practical concern in business applications, but the professional cryptographic community is hard at work on new hash methods. I think you should continue to use SHA-256 with confidence, but you should salt that hash for added protection!