Encrypting data in Microsoft SQL Server is easy to do, yet often difficult to understand because of the different encryption options offered in various versions. 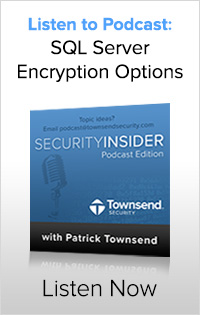 It used to be said that “encryption is the hardest part of data security, and key management is the hardest part of encryption”. While that may have been true a few years ago, we are constantly working to make affordable, easy-to-use, defensible solutions that meet security best practices and industry compliance regulations. Separating and managing the encryption keys from the data they protect is still one of the biggest challenges in terms of doing an encryption project right, so let’s take a look at what encryption & key management options are available for SQL Server users.

If you are running the Enterprise Edition of SQL Server, version 2008 or newer, you have access to Microsoft’s architecture for encryption called Extensible Key Management (EKM). This provider interface allows for third-party key management systems to be easily incorporated in order to separate encryption keys from the encrypted data they protect. A key management solution should provide Windows client libraries, guidance, and sample code within the solution.

Transparent Data Encryption (TDE)
With TDE, the entire database table (including the logs you are collecting) is encrypted.  It is a very easy mechanism to use for encryption and since it is transparent, no application level changes are needed, it only takes a few commands to implement. TDE protects data at rest, including backups and log files.

Cell Level Encryption
Also known as column-level encryption, this allows for you to selectively encrypt certain columns of information in your database. This option makes sense if you have large databases of information, and only access encrypted columns periodically.

If you are running older versions of SQL Server (pre-2008), or using non-enterprise editions such as standard, web, or express; you do not have access to TDE or EKM. You still have good options for protecting your data with encryption, just remember the encryption key needs to be separated from the encrypted data it protects.

C# and VB.NET Application Encryption
If you are developing in .NET you only need to plug in the client side application and implement a few lines of code for your encryption and decryption calls.

Column Level Encryption
Another approach would be to combine User Described Functions (UDFs) with triggers and views to help automate the encryption and decryption at the column level.

As more companies migrate their applications and data to the cloud, there are security issues to consider before making that move. Microsoft Azure SQL Database (MASD) -which has also been called SQL Azure, SQL Server Data Services, SQL Services, Windows Azure SQL Database- is a cloud-based service from Microsoft offering database capabilities as a part of the Azure Services Platform. The service is easy to use and readily available, just know that there are some constraints and some features of EKM that are not available when using MASD.

Most businesses migrating to the cloud will choose to run virtual machines that contain the Windows OS and a full implementation of the SQL Server database. By using a virtual machine, encryption and key management, including EKM with TDE, can be fully supported and provide the level of security you expect and compliance regulations require!

You have many options still available for your key management solution when your data has been moved to the cloud. Our NIST validated, FIPS 140-2 compliant Alliance Key Manager solutions are available as:

To learn more about encrypting data on SQL Server, managing encryption keys, and how we are helping companies protect their data with Alliance Key Manager, download the podcast on Encryption Options on SQL Server.