How Does IBM i FieldProc Encryption Affect Performance?

IBM i (AS/400, iSeries) customers have a great automatic encryption option with DB2 Field Procedures, or “FieldProc”. As with any encryption facility, users always have questions and concerns about performance. Performance impacts extend beyond just the impact of encryption itself, so let’s look at various aspects of performance when it comes to IBM i FieldProc. 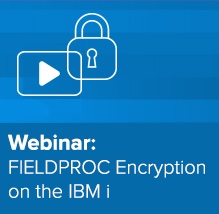 One of the largest impacts on performance comes from the actual architecture of FieldProc itself. IBM DB2 FieldProc is basically implemented as an event-driven exit point at the column level. What this means is that any insert, read, or update operation will trigger a dynamic program call to the FieldProc application program to perform encryption or decryption. There is definitely a performance penalty for this architecture. An application program that reads a large database on a modern IBM i server may be able to process hundreds of thousands of records per second. With FieldProc, that may be reduced to tens of thousands of records per second as the FieldProc program is invoked for each row in the table. You can still get good performance with FieldProc enabled (read on), but there will be an impact.

FieldProc Program Performance and Optimization
A FieldProc program is just an application program that you create or that your encryption vendor provides to you, so it can have its own performance issues. How much file I/O does the FieldProc program perform for each encryption or decryption task? How optimized is the application code? How optimized is the compilation of the program? Does the program perform any caching of internal information to improve performance? Like any program on any platform or operating system, a FieldProc program may perform well or not.

Encryption Performance
Surprisingly, there can be really big differences in the performance of encryption libraries even when doing the same type of encryption. You might think that 256-bit AES would have the same performance regardless of the vendor. And you would be really wrong about that. On the IBM i server platform I’ve seen a difference of more than 100 times between two different 256-bit AES encryption libraries. To put this in a practical context, this is the difference between 10 hours of batch processing versus 5 minutes of batch processing. That’s pretty dramatic. Encryption libraries can be optimized and should be optimized for performance. That is not always the case.

Number of Columns Under Encryption Control
The number of columns in a table will affect the performance of your FieldProc implementation. If you have three columns in a table under FieldProc control you will definitely see an impact on performance compared to a single column. Each read of a row in the table will result in three separate calls to a FieldProc program to perform decryption. This is not a linear impact on performance. That is, you won’t see an impact on the order of three times the impact of one column under FieldProc control. But there is a gradual impact as you add columns in the table. By the way, FieldProc will be called for each column even if your application does not use the column.

Encryption Key Management
Using encryption means using encryption keys. Assuming that you are not using a poor security practice such as storing the key on the same server as the encrypted data, the interface to your key management server represents another potential performance impact. How keys are retrieved and prepared for use by the encryption software can represent a hidden drag on performance. While a single key retrieval from a key server may take just a few milliseconds, the performance impact can be dramatic when thousands or millions of key retrievals are needed from a key server.

POWER8 On-Board Encryption
The new IBM POWER8 systems now have built-in support for AES encryption. This is similar to the Intel AES-NI implementation. While this does provide some improvement in encryption performance, it won’t be as much as you might expect. The built-in chip support for AES encryption seems to be optimized for encrypting very large chunks of data at one time. If you are encrypting a credit card number of social security number, you won’t see a really dramatic improvement in performance. IBM i customers using ASP encryption should really benefit from the built-in encryption. In some cases such as with Townsend Security's Alliance AES/400 encryption for IBM i, the software implementation provides big performance advantages over the on-chip POWER8 implementation.

Native SQL Applications
As most IBM i customers know, IBM has been on a tear to improve SQL in DB2 for some time. We’ve seen increasingly better performance of SQL applications over time. In the current release of the IBM i operating system and DB2 database the performance of SQL is impressive. Because SQL performs better, you will see better performance when implementing FieldProc in native SQL applications. Of course, you don’t need to convert your databases from DDS to DDL/SQL to use FieldProc, but if you do you will see better overall performance.

IBM i Navigator and SQL Plan Cache
When discussing database performance it is always important to mention the IBM i Navigator SQL Plan Cache function. This application comes with every IBM i server and is always available. It can show you how well your DB2 applications are performing, and can even recommend steps you can take to improve performance! When using FieldProc it can be a very helpful tool.