One of the easiest things to do to improve your data security posture is make sure that all of the transfers moving in and out of your organization are encrypted. The core components of any secure managed file transfer solution are the ability to protect and secure transfers as they move off of your system or as transfers move into your system using strong encryption. 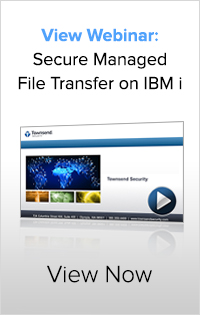 The two main transfer mechanisms are:

Implemented based on industry standards and integrated with the IBM i Digital Certificate Manager (DCM), new IBM i platforms have DCM installed by default. Our own solution, Alliance FTP Manager adds things like intelligent firewall negotiation and proxy server support which make those connections easier to deploy, as well as integrated logging to make sure that the sessions are properly logged for compliance regulations and compliance audits.

Secure Shell sFTP, based on how it encrypts, establishes, and maintains sessions is easier to manage from a firewall point of view than SSL FTP. We fully support password-based Secure Shell sFTP in batch mode and are the only vendor who fully implements that according to the standard.

Pretty Good Privacy (PGP) file encryption is the third critical component of a total encryption strategy.  PGP encryption protects data at rest, so when you move data securely across the internal network or across the Internet, you need to be sure that it's properly encrypted at it’s destination.  SSL FTP and sFTP encrypted sessions are great at protecting data when in transit however, when that data lands on an FTP server, it may not be inside a firewall and could be exposed. PGP is the most commonly used and widely deployed encryption in retail, banking, medical, insurance, and other industries to protect data and a fundamental part of a managed file transfer solution.

The commercial version of PGP, created by the original developers and now supported by Symantec, is fully implemented in our Alliance FTP Manager solution. Commercial PGP also offers features important to enterprise clients:

Beyond those three core components, you also need some other things to confirm that the encryption being used is defensible and has been reviewed by security professionals:

For an indepth look at a total encryption strategy, security expert Patrick Townsend presents a 30-minute webinar discussing how compliance regulations such as PCI, HIPAA, Sarbanes-Oxley, and new state/federal laws affect your company.  He also covers real-life examples of how others are meeting these challenges with Alliance FTP Manager and the new PGP solutions.