What is Encryption Key Management? 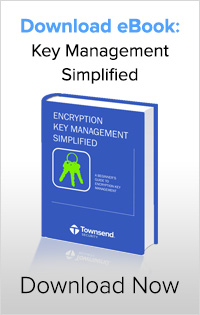 Key Creation: First, the encryption key is created and stored on the key manager server. The key can be created by a sole administrator or through dual control by two administrators. Townsend Security’s Alliance Key Manager creates the AES key through the use of a cryptographically secure random bit generator and stores the key, along with all it’s attributes, into the key database (which is also encrypted). The attributes stored with the key include its name, activation date, size, instance, the ability for the key to be deleted, as well as its rollover, mirroring, and key access attributes. The key can be activated upon its creation or set to be activated automatically or manually at a later time. Alliance Key Manager can also create keys of three different sizes: 128, 192, or 256-bit. The encryption key manager also tracks current and past instances, or versions, of the encryption key. You can also choose whether or not the key can be deleted, mirrored to a failover unit, and by which users or groups it can be accessed. Alliance Key Manager also allows the change of many of the key’s attributes at any time.

Key Use and Roll: Alliance Key Manager will allow an activated key to be retrieved by authorized systems and users for encryption or decryption processes. It also manages current and past instances of the key. For example, if a key is rolled every year and the version is updated, then the key manager will retain previous versions of the key but will dispense only the current instance for encryption processes. Previous versions can still be retrieved in order to decrypt data encrypted with such versions of the key. Alliance Key Manager also uses transport layer security (TLS) connections to securely deliver the encryption key to the system and user requesting it, which prevents the key from being compromised. The encryption key manager will also roll the key either through a previously established schedule or manually by an administrator.

Key Revocation: An administrator can use Alliance Key Manager to revoke or deactivate a key so that it is no longer used for encryption requests. In certain cases the key can continue to be used to decrypt data previously encrypted with it, like old backups, but even that can be restricted. A revoked key can, if needed, be reactivated by an administrator, although this would be more an exception to the rule than common practice.

Key Deletion: If a key is no longer in use or if it has somehow been compromised, an administrator can choose to delete the key entirely from the key database of the encryption key manager. Alliance Key Manager will remove it and all its instances, or just certain instances, completely and make the recovery of that key impossible (other than through a backup). This is also an option if sensitive data is compromised in its encrypted state. If the key is deleted, the compromised data will be completely secure since it would be impossible to recreate the encryption key for that data.