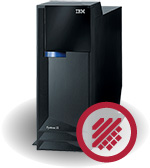 Everyone in the IBM i (AS/400, iSeries) world with responsibility for these large servers knows that IBM will soon announce the next release of the IBM i operating system, and that version V5R4 will go off of support a short time after that. While the date of the next release and the sunset date for V5R4 have not been announced, IBM has a fairly predictable pattern of new OS releases and support schedule. You can read Timothy Pickett Morgan’s thoughts in an article he wrote titled "The Carrot: i5/OS V5R4 Gets Execution Stay Until May."

So right now IBM shops running V5R4 are busy planning their upgrades. Many are planning to move just one version ahead to V6R1.

In V7R1 IBM provided a new automatic encryption facility in DB2/400 called FIELDPROC (That’s short for “Field Procedure”). This new facility gives IBM i customers their first shot at making encryption of sensitive data really easy to do. With the right software support you can implement column level encryption without any programming. The earlier trigger and SQL View options were very unsatisfactory, and the new FIELDPROC is strategically important for customers who need to protect sensitive data.

Another key feature in V7R1 is a new version of the Secure Shell sFTP application. This is rapidly becoming the file transfer method of choice. And IBM provides version 4.7 in V7R1. If you are doing a substantial amount of file transfers with sFTP, or you plan to do so, you will want all of the latest security patches in OpenSSH.

I know that an operating system upgrade is a lot of work, and that’s why IBM i shops are reluctant to do it very often. And when they do an upgrade, there stay there as long as possible. But FIELDPROC is only available in V7R1, it is not patched back to V6R1. And the latest version of OpenSSH is provided in the V7R1 distribution.

Download our podcast on "The Benefits of FIELDPROC Encryption" to learn more about FIELDPROC capabilities and the benefits of transparent encryption.  Additionally, we have a podcast titled "FIELDPROC Performance - Speed Matters" for those who are wondering how it will impact their systems.

Are you going to COMMON in Anaheim? I will be doing four sessions on security on the IBM i. Be sure to stop by the booth and say Hello!