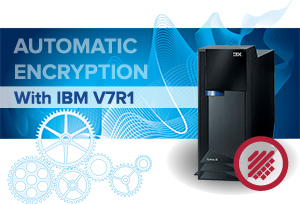 FIELDPROC is not encryption, it is an exit point. What IBM is providing with FIELDPROC is the opportunity for you, the customer, to implement encryption at the column level. You have to enable the option, provide the IBM i AES encryption software, and do the implementation yourself. This is different from SQL Server and Oracle TDE where the database does the encryption for you.

Operations are on encrypted data. In SQL Server and in Oracle, the database is decrypted and then the SQL operations take place on the plaintext values. Not so in DB2 FIELDPROC. The necessary information is first encrypted, and the operation takes place using the encrypted value. This can lead to some surprises if you are not careful about your approach to AES encryption and Initialization Vectors.

Decryption might not be called on a read operation.  Some IBM i customers are surprised that FIELDPROC may not be called when doing a “read equal” type of operation. In SQL this can happen in a SELECT clause with a WHERE statement. In the RPG language this can be a CHAIN operation with a key value. The DB2 database will call the FIELDPROC application to encrypt the search value, but not call the FIELDPROC application if the search is satisfied. That will defeat your attempt to do data masking on decryption!