System Logging for the IBM i - A Must Have Security Control

IBM i (AS/400, iSeries) customers now know that their systems are no more secure than any other. That is, they are just as much a target as any Windows or Linux server that exist in less secure network environments. This is not a criticism of the IBM i security implementation, it just reflects the fact that our IBM i servers are connected to a wide range of other devices including user PCs, network devices, local and WAN networks, and so forth. The attack surface is broad, IBM i servers are a rich target for data thieves, and we are all just one user PC infection away from an IBM i server data breach. 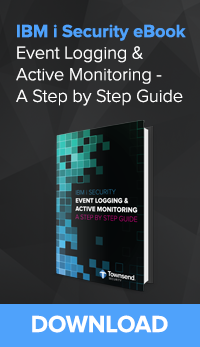 A lot of IBM i customers postpone deploying a system logging and SIEM solution to actively monitor for security threats, even though this is one of the most effective means of detecting and preventing a data breach. There is a reason that the Center for Internet Security recommends system log collection and monitoring with a SIEM solution as the 6th Critical Security Control. It just works really well when done properly.

I suspect that cost is one of the reasons that projects are postponed. This reasoning is “penny wise and pound foolish”. Here’s why:

From a Governance, Risk Management and Compliance point of view deploying the CIS Critical Security Controls is a minimum requirement. Here is what the California Department of Justice said in this year’s data breach report under “Recommendations”:

“The 20 controls in the Center for Internet Security’s Critical Security Controls identify a minimum level of information security that all organizations that collect or maintain personal information should meet. The failure to implement all the Controls that apply to an organization’s environment constitutes a lack of reasonable security.”

Every senior executive in the modern organization understands that canceling the fire insurance policy on their headquarters building would be a bad idea. You would be one fire away from the end of your career. The same now holds true for IT security. Shareholders and the board of directors now understand that the failure to use reasonable measures to protect data assets is a fundamental failure of governance. Don’t be the executive who has to try to defend that failure!