Microsoft SQL Server customers ask us whether they should use Always Encrypted or Transparent Data Encryption (TDE) to protect sensitive data. It is a relevant question, especially given the concern for the GDPR, and it is relevant to many other compliance regulations and data protection needs. Let’s explore these technologies in more detail and I think the answer will emerge. 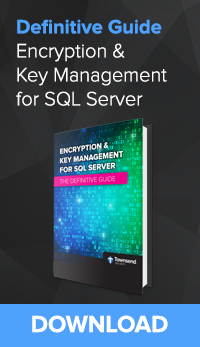 Always Encrypted is a relatively new, client-side implementation of encryption for SQL Server. That is, data is encrypted on the source system before you insert it into a SQL Server database. Implemented as a Windows driver, Always Encrypted intercepts your SQL statement before it leaves your client-side system (PC, web server, etc.), determines if there are any fields in the SQL statement that need to be encrypted, establishes or retrieves an encryption key, encrypts the field, and sends the modified SQL statement to SQL Server for processing.

One advantage of this approach is that the data is encrypted as it travels over the internal or external network, and as it resides in the database. A retrieval of the encrypted data reverses this process ensuring that the data is protected in transit.

SQL Server Transparent Data Encryption (TDE) and Cell Level Encryption (CLE) are server-side facilities that encrypt the entire SQL Server database at rest, or selected columns. The client-side application is completely unaware of the implementation of TDE or CLE and no software is installed on the client-side system. All of the encryption tasks are performed by the SQL Server database itself. It is easy to implement and performs very well for most SQL Server customers.

TDE and CLE are a part of the Microsoft SQL Server Extensible Key Management (EKM) strategy which has been a part of SQL Server since the 2008 edition. It is a mature technology and many organizations deploy TDE or CLE to protect their sensitive information.

The bottom line: you can achieve proper key management with either approach, but expect to deal with more complexity with Always Encrypted when you have distributed clients.

When to Use Always Encrypted

When to use TDE or CLE

Transparent Data Encryption and Cell Level Encryption are implemented directly in the SQL Server database itself. This means that complex SQL operations are fully supported and you will not find limitations imposed by your encryption or application strategy in the future. The SQL Server implementation of TDE and CLE also support a standardized interface for encryption key management. This means you will have choices in key management vendors and can readily find a solution.  TDE also has good performance metrics for the large majority of SQL Server customers, and is exceptionally easy to implement.

For the reasons outlined above I believe that Transparent Data Encryption or Cell Level Encryption implemented within SQL Server will almost always be the better choice for most SQL Server customers. You will not be locked into restrictions on the use of SQL operations, key management is well defined, and the encryption performance metrics are impressive.

I hope this overview of the two SQL Server encryption approaches has been helpful. Please feel free to reach out with any questions you have.