In my role at Townsend Security I engage with companies both large and small and have many conversations about data breaches and security. One pattern that I see a great deal is the belief by privately held companies that they are not subject to compliance regulations, are not a target by cybercriminals, and don’t have much to worry about. The feeling seems to be “Gee, we are not publicly traded so we don’t have to do all that security stuff. It’s hard and expensive and it doesn’t really apply to us. Besides, we are too small for hackers to bother with.” I’m sure I’ve heard exactly these comments a number of times.

For the sake of these small businesses who represent the real backbone of our economy, we need to dispel these myths. Let’s look at a few of them: 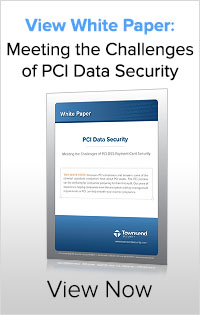 Anyone who takes credit or debit cards in their business must comply with the PCI Data Security Standard (PCI-DSS). When you signed your merchant agreement you agreed to be bound by the data security standards for payment cards. This is not a government regulation - this is an agreement between you and your payment provider and they all require this compliance. It doesn’t matter if you are small or large, privately held or publicly traded on the NYSE. You have to meet PCI compliance for security. Failure to comply with PCI-DSS standards can put you a jeopardy for loss of the ability to accept credit card payments. This can be devastating for any company.

I Only Store a Small Number of Credit Cards, PCI Doesn’t Apply to Me
This is an incorrect understanding of the PCI Data Security Standard. Processing a small number of payment transactions, or a low dollar amount, may put in you a lower category for PCI compliance, but the PCI-DSS still applies to you. In the event of a data breach you may find that you have new on-site PCI audit requirements, additional liabilities, and you may have to pay a higher rate to authorize payment transactions. These effects can really hurt your business. Rest assured that if you take credit card payments the PCI-DSS requirements apply to you.

We are Not Big Enough to be a Target
Many executives and members of the IT organization at privately held companies believe that they are not a target of hackers and cybercriminals simply because they are privately held and small. This falls into the category of wishful thinking. In fact, as the FBI reports, smaller private companies are increasingly the focus of cybercriminals and are experiencing significant financial losses. Here is what John Iannarelli, and FBI consultant, says:

"Time and again I have heard small business owners say they have nothing to worry about because they are too small to interest cybercriminals. Instead, small businesses are exactly who the criminals are targeting for two primary reasons. In the criminal's mind, why go after large companies directly, when easier access can be attained through small business vendor relationships. Secondly, since small businesses have less financial and IT resources, criminals know they are less 'compromise ready' and tend to be less resilient."

Compliance Regulations Don’t Apply to Us
It is true that if you are a private company the Sarbanes-Oxley compliance regulations certainly do not apply to you, those regulations only apply to publicly traded companies. And the Federal Information Security Management Act (FISMA) does not apply to you because it only applies to US government federal agencies. You are, however, covered by state privacy law, PCI Data Security Standards (if you accept credit or debit cards), HIPAA if you are a Covered Entity in the medical segment or if you process patient data for a Covered Entity, and the Federal Trade Commission (FTC).

We are Not Under FTC Rules About Data Privacy
The Federal Trade Commission has a broad charter to protect consumers and this includes enforcement for consumer privacy. From large companies like Google, Facebook and Twitter to small companies like an auto dealership, the FTC has taken enforcement actions that include private companies. The enforcement actions can include fines, mandatory audits that last for many years, and other penalties. Private companies do fall under FTC jurisdiction. You can read more about the FTC and data privacy here.

In summary, smaller privately held companies are the target of cybercriminals, are less prepared to deal with an attack, and have fewer resources to recover from an attack. No competent executive in a privately held company would forgo general liability insurance for their business, but are much more likely to suffer a loss from a cyber attack. It is not good business sense to ignore real threats.

Some last thoughts from the FBI:

The criminal then either creates another account or directly initiates a funds transfer masquerading as the legitimate user. The stolen funds are often then transferred overseas. Victims of this type of scheme have included small and medium-sized business, local governments, school districts, and health care service providers.

The potential economic consequences are severe. The sting of a cyber crime is not felt equally across the board. A small company may not be able to survive even one significant cyber attack.

Federal agents notified more than 3,000 U.S. companies last year that their computer systems had been hacked, White House officials have told industry executives, marking the first time the government has revealed how often it tipped off the private sector to cyberintrusions.

The alerts went to firms large and small, from local banks to major defense contractors to national retailers such as Target, which suffered a breach last fall that led to the theft of tens of millions of Americans’ credit card and personal data, according to government and industry officials.

“Three thousand companies is astounding,” said James A. Lewis, a senior fellow and cyberpolicy expert at the Center for Strategic and International Studies. “The problem is as big or bigger than we thought.”

“Within hours of us coming up with information that we can provide, we would go to a victim,’’ said Edward Lowery, Secret Service special agent in charge of the criminal investigative division. “The reaction would be just like when you’re told you’re the victim of any crime. There’s disbelief, there’s anger, all those stages, because there’s a lot at stake here.”

Yes, Indeed. There is a lot at stake.