Looking Back on 2015 Data Breaches 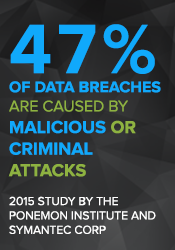 2015 was a year of large and sometimes very controversial data breaches across a broad industry spectrum.  The Identity Theft Resource Center 2015 Breach List contains 780 breaches and 177,866,236 exposed records. Here are just a few that everyone should be aware of:

Wrapping up the year; on December 20th, 191 million registered U.S. voter records were exposed online. The database that was discovered contained more than the voter’s name, date of birth, gender, and address; which on their own is a good amount of personally identifiable information (PII). It also include the voter’s ethnicity, party affiliation, e-mail address, phone number, state voter ID, and whether he/she is on the “Do Not Call” list.

As we head into 2016, we will be focused on prevention and how we can best provide information and solutions to protect your sensitive & valuable data.

Let us know how we can help you!